Electricity Is One Of The Important Requirement Of Our Life 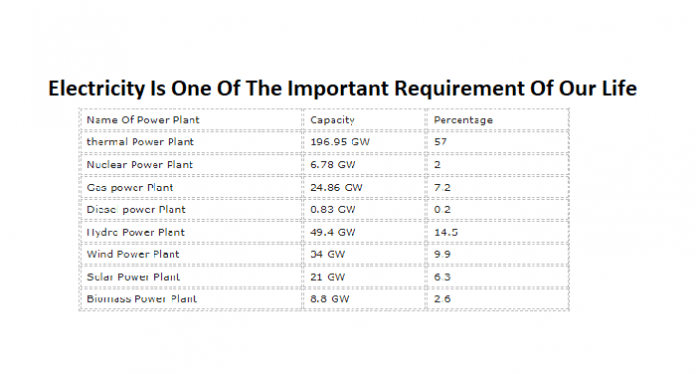 Electricity Is One Of The Important Requirement Of Our Life

It is said that necessity is the mother of invention.it is very old proverb. As the human mind fastly developed, he started making new inventions. Till now human has made so many inventions that even counting them is a great job for anyone. These inventions made a big difference in his life, even his life became so easy. The invention has to one and everyone got the benefit. With this an invention happened which is useful for every human being. That invention is Electricity, Electricity is energy that already exists in nature, and the credit for electricity discovery is given to Benjamin Franklin. Electricity become so useful that without it seems incomplete because, we got used to it electricity made a lot of our work very easy. Many people have also got employment in this field.1 How electricity is made

A – Electricity is made in big plants whose capacity is also different. Coal is the main resource for generating electricity. The type of coal is also very important in electricity generating. The plants in which electricity is generated are spread in 1-2 km. it is also sources of water supply. According to an estimate 1.5 million coal stock is required for make 40 days electricity, The coals are cleaned  with water from time to time so that its  do not get soil particles, then The coal is then grinded to make a black powder. Put this black powder in the boiler, that catches fire, Heavy ash of coal falls down after catching fire, and keeping it light ash goes into the atmosphere on the way of chinois. Now this fire sends fire to those tubes which are full of water. When this water turns into steam, then this steam is sent forward from these tubes. This heat spins the turbine, in this process the important role of turbine is. A high power energy is generated due to the rotation of the turbine, then Transfer this energy to the big generator, causing the magnetic field to be disturbed its reason is mechanical power. Thus electricity is generated. Do not store it and send it to the next substations by transformers. The steam formed in this process is cooled down and converted back into water. It is called thermal power plant.B Nellore Power Plant, C Gas Power Plant, D  Diesel Power Plant, E Hydro Power  Plant ( Lager and Small ), F Wind Power Plant G Solar Power Plant H Biomass Power Plant 2 Electricity generated every year in IndiaIndia’s population is very high, so electricity is also needed. Electricity is produced at many places in India. India electric Capacity is 344 GW.The power generation capacity of each power plant in India is different, as is :